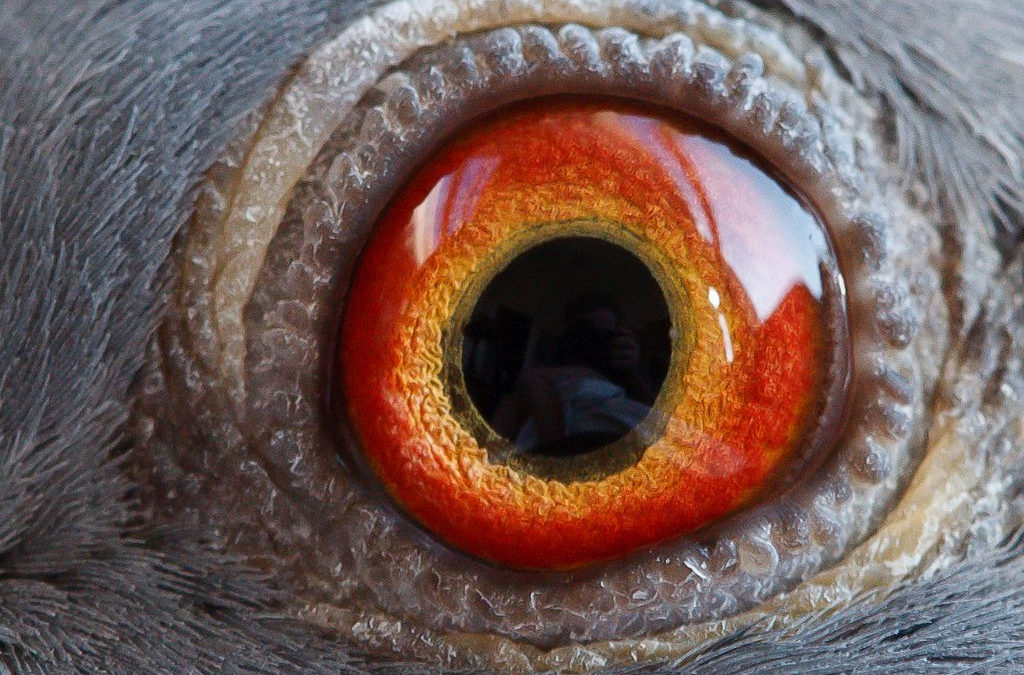 A look into Eyesign – An Alternative View
By: Alan Wheeldon
Email: [email protected]

Eyesign is rubbish. I will repeat that in case there is any doubt how I stand on the subject. Eyesign is utter rubbish.

For anyone to think that the racing performance or breeding potential of a pigeon can be linked to it’s eye is crazy. What astounds me is that after rearing it’s ugly head, I thought the taboo of eyesign would sink into insignificance, a fad, a passing novelty, and once people realised that it had no foundation, the subject would be dropped like a ton of bricks. But no! It’s still with us. In fact I think that recently, driven by the new wave of videos and books, it is even gaining momentum!

I can’t believe that I’m even writing on the subject, it is a non topic. It shouldn’t be the subject of conversation for anyone. But why is eyesign still a fashionable subject?

I think it tells us more about ourselves as people than as pigeon fanciers. The example that comes to mind is the story of the Emperors new clothes. You remember the story where the kings tailors managed to convince the king that his new costume was the finest in the land, but in reality there was no new costume, because they’d run out of material. Well the king was convinced, and he paraded through the streets naked, to show the people his fine attire. (And this is where the pigeon fanciers come in). They lined the streets waving and cheering and although they couldn’t see a costume it only took one of them to proclaim that it was the finest costume that he’d ever seen and the whole crowd agreed, in case they were thought to be mad.

And this is what has fueled the enthusiasm of the eyesign brigade. As soon as one successful flier says that he uses eyesign for selecting his best pigeons, people suddenly follow in the hope that they can be as successful. Others have joined them, believing that there was at last a short cut to finding and breeding winners. But I wonder if will they ever finally realise that there is no magical eyesign. The king really is naked!

And what hasn’t helped is that the theorists have jumped on the band wagon. Ironically, many of them, not successful pigeon fliers at all. In fact some don’t even keep pigeons! But I suppose their motivation is that it makes them feel important, by being a self proclaimed authority on something, even if it has no basis. The glaring observation, that illustrates immediately that eyesign is a fallacy, is the wide variations in the descriptions given on what exactly a ‘good’ eyesign looks like.

What is really worrying, is that if pigeon racing was a high profile sport, and the public found out that we look into a pigeon’s eye to see if it will win a race, we’d be ridiculed. In no other sport has such an absurd concept held any credibility. Take horseracing. When you watch the racing on the television you never hear the commentator mention whether the winning horse had a complete circle of adaptation! And when I go greyhound racing I don’t hear over the speaker system that the dog in trap six has a diffuse violet blending into a broken circle of correlation! And what of the great human athletes when they win gold medals in the Olympics it’s not even mentioned what colour their eyes are!

What also hasn’t helped is the scribes, who have trodden a safe path by coming to a happy compromise and saying that eyesign has it’s merits, but that other things also contribute to performance and breeding. They often recount stories of people picking the best bird in the loft, or at a show, by eyesign. To view a birds eye properly the pigeon has to be picked up or at least viewed at from very close quarters, I suspect that any success is because of the other attributes that a champion pigeon carries.

Let us look at the so-called ‘signs’ in the eye and identify what the eyesigners are really looking at:-

1) Pupil – Yes It’s the pupil. The hole, or aperture through which light must enter for a bird to be able to see anything. It is usually a symmetrical but it can often be elliptical. It makes little difference.

2) Circle of adaptation – It’s really the sphincter muscle around the pupil. This is needed to change the size of the pupil to prevent too much light entering the eye and damaging the retina. In bright sunlight it will contract and pull the iris towards the centre of the eye, thus reducing the size of the pupil.

4) The Iris – The thin contractile coloured membrane that prevents light entering the eye from the too many directions. Without the iris not all the light would pass through the pupil to the lens and the image would be ill defined and blurred. The reason the iris is coloured is to prevent bright sunlight penetrating into the eye and damaging the retina. The coloured pigment acts as a shield. This is why albino children who lack eye pigment have to wear sunglasses most of the time to prevent damage to their eyes. Without that pigment the pigeon would be blinded every time it went out into the sun.

It can be seen that these structures all have perfectly sensible functions and they serve the same purpose in all animals, from pigeons to cows. They certainly won’t predict whether a pigeon will win a race or breed a winner. So what are the real qualities that common sense tells us contribute to the performance of a pigeon?

The environmental factors : Diet, nest position, position in the moult, the presence of disease and the pigeon’s previous training. All these things contribute to a pigeon’s health, form, fitness, condition, morale and homing abilities.

Other factors: The age of the pigeon, the weather, the drag of the race, the position of the loft, all contribute to a pigeon’s racing performance. Also how long the pigeon is in the transporter, and whether or not it gets a drink, will affect it’s racing performance. Plus the one thing that no pigeon’s eye has any influence over :- how stiff the competition is! There may be many birds in a race with a so called ‘good eyesign’ but there will only be one winner.

I used to become irritated at the insistence of the pigeon press to print close-ups of a winning pigeon’s eye, some journals even put the close-ups on the front cover, but I have since realised that this has done us all a favour. Just look back at all the eyes ever printed of previous champions you will notice one thing. They are all different! No one eye is the same. They could almost be used like fingerprints are today to identify individuals. One particular champion recently published had the worst so called ‘racing’ eyesign I’d ever seen. Just look at it (Racing Pigeon Pictorial March 99 No.350 Page 39). In eyesign terms the eyesign is a complete mess. The eye has a diffuse red brown iris completely broken at the front by large gashes of black that run against the grain of the underlying colour. The pupil is an asymmetric ellipse! The outer circle is incomplete! And this is the clincher – it has NO visible circle of adaptation in fact the inner edge is jagged! And yet, this particular pigeon, called ‘De Slap’ was raced by Jef De Wilder. It won the National From Limoges 1997 21,776 birds and just for good measure won 1st Provincial from Chateauroux 2,744 birds a month later. It’s a good job Jef isn’t an eyesign man or he would have immediately outed the pigeon as a youngster.

Another example that illustrates why eyesign is rubbish can be seen in the same journal on page 14. There is a fabulous photograph of Dennys Boy, 1st Open SMT Combine from Sennen Cove for Vic Johnson and yes there is a picture of his eyesign……both of them……this pigeon has two completely different eyes, and in eyesign terms neither of them is a particularly spectacular racing eye.

So what were the origins of eyesign theory? To find out I dug deep into pigeon literature. I had to go back 55 years to The Homing World Stud Book of 1945. It was nearing the end of the second world war. On page 27 there is an article entitled ‘The Eye’, unfortunately the author’s name was not even mentioned. But within this 3-page article are some key remarks. I quote:-

‘In the pigeon world the eye was formerly used to name the strain or variety of bird from which any particular pigeon was descended. The Antwerps had this kind of eye; the Smerles had that kind; the Carrier had another kind and so on. But all these characteristics have been lost in the maelstrom of mixed breeding, breeding without understanding, to get the perfect racing pigeon. Now the original characteristics have become almost inextricably muddled.’ The author goes on:- ‘The conglomeration of types and strains became so great that it was almost impossible to sort out these old originals and few fanciers regard the eye theory with any seriousness.’

So what is the future of eyesign? Well I think that it will be with us for a long time yet. It’s appeal will be to play on peoples curiosity, particularly those wanting a short-cut to producing winners. This curiosity will be fired by the commercial drive to sell videos and books on the subject and by isolated, unconfirmed, anecdotal accounts by evangelists, claiming of the miraculous predictions that can be made using eyesign.

And after all this we will still fail to realise that the only purpose of a pigeons eye is to see with!