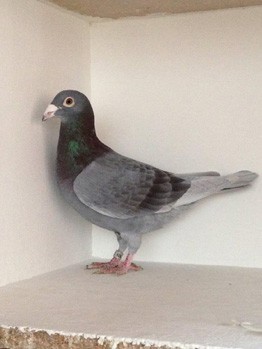 A loft report on our member chris roscoe.

This is a Loft report of Chris Roscoe, who’s the Site Administrator for ukpigeonracing.co.uk.

Chris started the site up in December 2011. To start with Chris would like to give a special mention and thank you to Buster and Killer, on the forum, who kept things going when Chris found himself not being able to give to it the time he wanted.

Where it all started:

Chris started in pigeons at a young age. He was always attracted to pigeons, but isn’t sure why. When he was around 10 years old his granddad built him a loft that measured 12ft x 6ft which was painted green. Chris was chuffed with this first loft and from here his interest grew. Chris then signed up to a pigeon magazine, found a few local fanciers and managed to get some pigeons for free. Chris never got to race these first additions but can remember seeing them flying out and he was always replacing the straw on the loft floor. Chris’s parents made him get rid of them about 3 years later, but allowed him to keep 3 white ones. These were then taken back to the pub that Chris’s parents were landlords of. Chris remembers taking them into his bedroom most days and they would fly in and out of his bedroom window in the pub. Every morning he said they would be sat on the bedroom wardrobe. This continued for 4 years until one day when they disappeared.
Chris started racing again in 2010 when Chris and his partner Jade had their son Ryan and got a council house which allowed him to have pigeons at his own address. Chris started off with a small garden shed that he converted into a pigeon loft. He joined the Wellingborough South Road Flying Club. Chris won the first race he competed in at his new home with a Grizzle Van Loon hen that was gifted to him by James Fillbrook, a friend he made online and who he still has contact with now.
Chris took another break from the sport in 2012 before starting once again in 2014/2015, joining the Rushden and Raunds south Road Flying Club, being part of the Mid Northants South Road Fed. This time he built himself an L shaped loft, having no success in this one it was pulled at the end of that season. This was replaced with a 27ft x 7ft loft split into 4 sections. One section with 16 widowhood boxes in. A section with hen boxes with lockable fronts in and a youngbird section with lift off perches. The other section was used for storage. Chris also had an 8ft x 6ft stock loft.
Chris found himself having to pack up once more due too the break up between him and Jade.
.
The various lofts

Chris was lent some Stock birds from Devo (George Dever) off of this site along with a few that were brought in. 6 pairs of stock birds were generally kept.

The old bird race team consisted of 12 widowhood cocks and 12 hens. These were only raced in sprint races as Chris never got the chance to try them any further.
These birds would race in the club every week providing they were fit and healthy and they were flying well around home. They would be trained once or twice a week if felt necessary.

Youngbirds:
.
Chris would breed around 30 youngsters that once weaned are let out after 3 days to wander around the garden to get used to the area and getting called in.
Training would start once the youngsters were ranging well and flying around home for at least an hour.
This would be started at 10 miles, always on the line of flight that Chris felt was where he wanted them to come from. To start they would all be let out together until they were beating him home. They would then be released in 2-3s until making good time, then they would be moved on to the next stage, continuing in stages up to 40 miles.

The old birds would be fed on Gerry Plus and a Widowhood Mix with boost x5 mixed on the corn towards the end of the week. No breaking down was done.
The stock birds had an all round mix with peanuts fed as treats when feeding.
Youngsters were weaned onto Gerry plus and stayed on that for the season.

The birds would be routinely treated for canker, cocci and worms before breeding and again before training started. After that droppings would be sent off to be checked and only treated again if necessary.

Chris considers probably his best performance to be with a young Red Chequer cock, bred by himself, that won 1st Club, 1st Fed. Winning the club by 5 minutes and the fed by 4 minutes. The full brother to this cock also topped the Fed by a fellow club member the following week.
.
The fed winner.

Chris would dearly love to get back into pigeons at sometime in the future and look build a team around Staff Van Reets and Gabby’s, crossing the 2 families to produce a team that could compete in both inland and channel races. Pairing best to best.

Advice to anyone coming into the sport:

Chris’s advice to new starters would be to research your area, find out what the possible line of flight would be, then find birds that are winning in your area and try to purchase some young birds from them. Failing that look at peoples results and find what strain they are winning with or you would like to try and get the best you can.
Nothing happens overnight, it can take 3-4 years to build a strong team so patience is key.